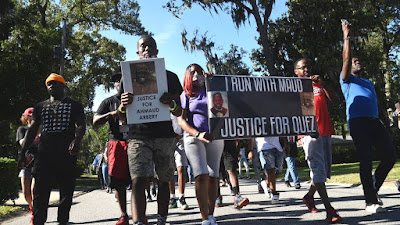 The Case of Ahmaud Arbery: When Racism, Guns, and Inequality Collide

By now, most Americans have heard of Ahmaud Arbery. The shocking video of his murder at the hands of the faux vigilante father and son duo has gone viral. In February, Mr. Arbery was jogging in the Georgia city of Brunswick, when he was accosted by two men who said they believed he was robbing homes. They approached him, harassed him, and then shot and killed him.
Here we are again in America with another high-profile case of a race-inspired, minimally prosecuted murder. The tragic list is long: Emmett Till, James Byrd, Travon Martin, Eric Garner, and Botham Jean represent just a few. This violence is not uncommon as African Americans are the most likely victims of U.S. hate crimes. The sheer reliability of these incidents force the nation to engage in uncomfortable self-reflection. Like a painful medical procedure, we must take the difficult steps of exploring the root causes of the disease and not just the symptoms. The symptoms, the two racist gun-toting men eventually arrested for the crime, are acute. Yet we exert time and energy on them at the expense of tackling the greater national disease; what Dr. King called the triplets of racism, materialism, and militarism. These pernicious and persistent evils represent America’s true sickness.

Racism
Racism is a historic national cancer. Yet our collective denial and desire for cheap grace are as ineffective as a person trying to hide and ignore a large tumor. No matter how much we try to move on, we cannot. Consequently, most Americans have just learned to accept it; passively consenting to a certain racial caste system that is reflected in our public spaces. Every trip to a mall, airport, or restaurant reinforces the inequality to which we have grown accustomed. People of European descent sit in first class, own our industries, and occupy the top rings of our capitalist society. People of color occupy the poorest and most dangerous communities, and disproportionately are the greatest victims of our failure to live up to the promise of equality. The average African American family has 1/10 the wealth of the average European American family. Home ownership, the greatest source of wealth for Americans, is 30% less in communities of color. With this backdrop, African American achievement is seen as exceptional rather than customary. Our collective psyches have been emblazoned with these disparities. Accordingly, most of us are both victims and perpetrators of America’s racial hierarchy. Armed with this delusion, a dark-skinned man running through a neighborhood is easily and traditionally perceived as a potential criminal. When you come from a group that represents the bottom of the caste system, it is common for others to believe that your life does not matter.

Materialism
Furthermore, capitalistic materialism has left a moral vacuum longing to be filled. The faulty principles of self-reliance and individualism allow the wealthiest nation in the world to willfully ignore the causes behind our glaring social inconsistencies. Americans consistently consider the economy their greatest priority in choosing leadership. Our deity-like focus on this sector as our greatest political and social hope allows us to honor those who place corporate profitability above all. As long as some individuals can make money, Americans are happy. Education takes a backseat to entertainment, justice to jobs, and freedom to financial prosperity. Those that are left behind are considered responsible for their own failure. In this individualistic model the greatest sin is not injustice, rather the blasphemous notion that justice is more important than profit.

Militarism
Coupled with both racism and materialism is the problem of the violence born out of a militaristic culture. With over 300 million guns in a nation with a population just shy of that number, we have the dubious distinction of being the most heavily armed society on the planet. 23,854 and 14,542 Americans die by firearms through suicide and homicide, respectively. We spend more on the military than the next top ten spending nations in the world combined. Why? What makes us so afraid, so bloodthirsty, so sad and angry, so willing to turn to violence to solve our problems? For every social ill that we face, racism, depression, poverty, anxiety, and drug use, easy access to guns serves to fuel the flame. So, what can we do? I will provide that analysis in a future continuation of this piece. However, we must not look at this latest example of bigotry and violence in Georgia as isolated. Clearly, it is who we are.
The God of the Bible instructed the early believing community to not “deny justice or show partiality.” There were heavy social consequences laid out for the early Jews in the book of Deuteronomy for infractions like murder. The principle of restitution was set forth to address violence and wrongdoing. Human beings, made in the image of God, have an innate desire to see good rewarded and evil punished. When this doesn’t occur, even children are unsettled and confused. Where there is no justice, there is no peace. Consequently, our society must do the hard work of ensuring justice for African Americans or this nation will face perpetual turmoil, tragedy, and violence. We must confront our historic and current practices of slavery, segregation, mass incarceration, redlining, and economic exploitation. Otherwise we are left with simplistic and ignorant explanations for our obvious inequality that serve only to further promote racism. Without this kind of painful and comprehensive treatment, America’s cancer will prove fatal.